The San Diego Model Yacht Pond (aka the “San Diego Model Boat Pond” or just “The Pond”)  was originally built into the Mission Bay master plan in 1939 as a continuation of a long standing program with the City Schools of San Diego of building Model Boats and competing between schools on the pond. After the club was formed, club members continued to work with the city until the program was eventually dissolved; yet the Argonauts continued. This article is for all members, new or old, as a reminder of the club’s history and perhaps a yard stick to judge our success as a club today. 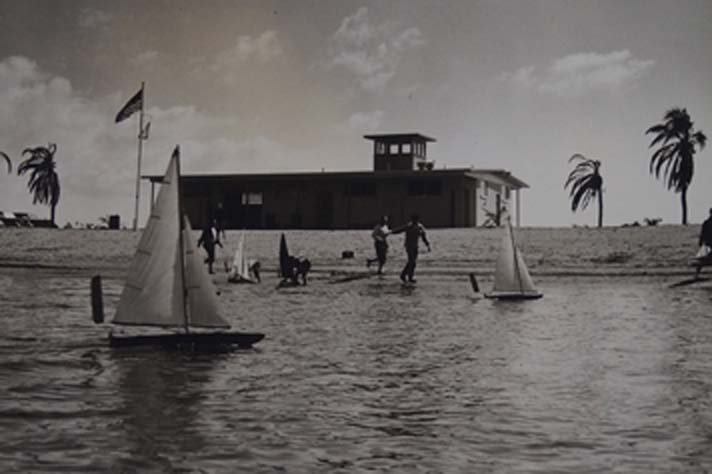 On March 24, 1959, a group of Model Boat enthusiasts emerged from among the customers of Lee’s Hobby Shop in San Diego. These modelers found they had a common interest in Radio Control. Some of the modelers, being Amateur Licensees, were well along in controlling their craft by radio. Others were seeking help and information. This common interest and the need for cooperation resulted in the founding of the San Diego Argonauts Radio Control Model Boat Club.

John “Doc” Hawes was elected the first Commodore on April 7, 1959. This was the first organization on the west coast devoted solely to radio control model boats. During the first years of the club, operation of the pond was shared with the San Diego Model Yacht Club on an alternate weekend basis.”

With the demise of the San Diego Model Yacht Club, the Argonauts became the only organization using the pond and today considers the pond its home water. In 1962 the field house at the pond became available and the club moved in. The original membership of the Argonauts consisted mostly of scale modelers running scratch- built and kit boats incorporating a great deal of detail, but “Plank Owner” William “Red” Blackford and a few others interested in speed provided research and incentive to the rest and now racing and speed are the primary interests. The members were competition minded from the outset, and the club was instrumental in pioneering contests and courses. These were primarily precision steering events and, for the few speed fans, the one and three lap oval speed events. Seeking a greater challenge, obstacle racing was introduced in 1961 and originally was divided into two events: Open and Cabin.

Throughout this period of development in the early 60’s, a few members insisted on running together (sometimes into each other), and by June 1964, this insistence had spread and culminated in the Argonauts first all boat Endurance Race, a one-hour event that met immediate enthusiasm and acceptance and has spread throughout R/C boating.

Model Sailing, which had been present since the beginning of the pond, was at first limited to “Vane Sailing” or Free Sailing in which the boats were prodded by a long stick from one end to the other. The original design and its east/west layout was made with sailing in mind from the beginning and proved one of the finest yacht basins anywhere. Initially Radio Control was applied to large ships and models due to the size of the radio components, but it didn’t take long for some adventuresome sailors to try them out on their model yachts. Many demonstrations took place; and in November of 1969, discussion centered on the formation of an Argonaut Sailing Team. There were five entries in the first Argonaut Sailboat Race for points held at Santee Lakes on March 29, 1970. The club alternated between Santee Lakes and the Model Yacht Basin.

As a pioneer organization in R/C boating, many of San Diego skippers have brought proud recognition to the Argonauts by achieving International and National Championship status. Let’s salute the men and women who over the past years, have given many hours of their time to make our club what it is today!