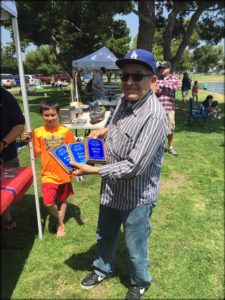 On June 25th, 2016 a motley crew of Captains, First Mates, and Able Bodied Seapersons dared the submerged shoals, sandbars, shore batteries, volcanoes, and other obstacles to compete in the San Diego Argonauts’ Scale Boat Regatta at and in San Diego’s Vacation Island model boat pond.  Water locked landlubbers came all the way from Huntington Beach, Riverside, and San Bernardino for the chance to test their piloting skills in the salty brine of our pond. They were joined by a throng of spectators and other scale builders who were either sodium-averse or hydrophobic, but who nonetheless captured the imaginations on many a would be tar or future modeler.  In addition, Rob Wood of the near maniacal sect of battle pond enthusiasts was there to lend a hand and to try to induce other boaters to join his cult of like-minded sailors who actually plan on sinking their boats. 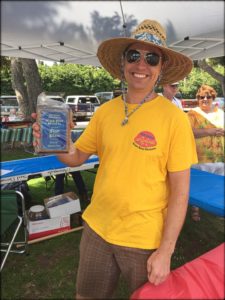 The awards, although rigged like a schooner, went to the following old salts:
In the Best of Class, the winners in each class are:

In Navigation the winners were: 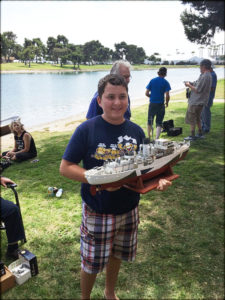 The BEST of SHOW went to Mr. Tony G. (who, wishing to dodge the paparazzi and gold diggers, refused to provide last name).

The whole affair was deemed a smashing success – in no small part to the efforts of Rosemary Kapler who catered the event – knowing full well how cranky hungry sailors can be.  The only complaint was that the grog was watered down.

Additional logistics were provided by the future president of the Argonauts, young Master Dave Kaplar, who helped the old salts rinse off (and he cleaned their boats too!).  Jeff Sparksworthy and Vice Commodore David Alvarez ran the registration table and carefully cooked the scorekeeping books, as well as selling tickets, and making award plaques. 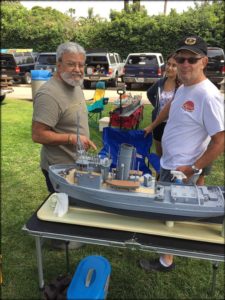 Special thanks are due to Rob Wood, Martin Bunch, David Manley, and Don Johnson for heading the judging. Thousands were raised in bribes alone!  Another big, calloused hand goes to galley slave Ron Tindall for rowing while Mark Weber set up islands and to Don Johnson for bringing them in.

We all deeply appreciate the continued support of John at Discount Hobby Warehouse and we all need to thank Jimmie Hawkins for his mystery raffle prize. Other donors include Mike Rivera’s for tools, Martin Bunch for kits, and Don Johnson for motors. A shout of “thanks” goes to all of the other named and anonymous prize donors. The event seems to grow like a barnacle and yet to somehow get better every year, due in great part to the “all hands on deck” attitude of the scale division and to the support of our fellow obsessives in the sail division.  We even had some people crossing the once dangerous taboo between sail and motor driven groups. Perhaps we should have a shellback ceremony next year to welcome them to this side of the equator. Some intrepid sailors even made a mad dash to run their boats through the obstacle course under sail, although their comments can’t be printed in a family publication. 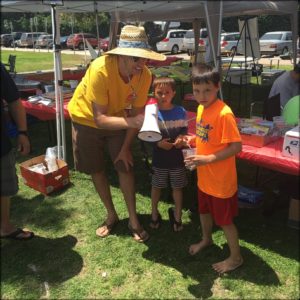 more entries, a submarine class, and a special category of heaviest AND ugliest boat to placate a certain obnoxious amateur builder.

Thanks to all who worked at and attended our event and my apologies to any and all who expected the full truth and nothing but the truth in this press release.