Well mates, they said it couldn’t be done, but some intrepid Argonauts forsook their usual watery hole and helped staff a booth at the San Diego Maker Faire in Balboa Park to help promote the Argonauts and the Western Warship Combat Club. 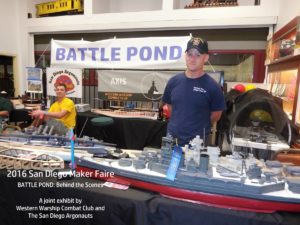 Hundreds of amazed adult visitors and their busy handed children showed up to marvel at the diversity and durability of the craft on display and to try their hand at Rob Wood’s gunnery range.  The only near constant lament was the fact that we didn’t have the battle pool this year to allow the bloodthirsty little blighters to send ships to Davey Jones’ Locker. 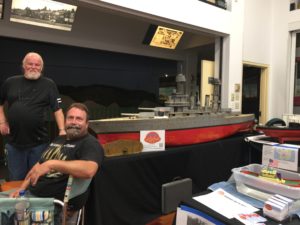 Among the hands on deck were Mark Weber, Ron Tindall, Jarod Black, Little-Big-Dave, Rob Wood, Jeff Sparksworthy, Mark Shaw, and whoever else I forgot to mention.

One of the main goals of the effort was to engender the next generation of Argonauts without having to get involved in any Shanghai-shenanigans. 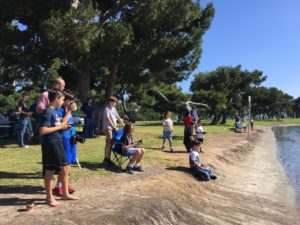 Many a hearty thanks goes out to Rob Wood and some fellow Western Warshipers and Argonauts for putting together a fun-filled, hands-on day at the pond for young would be skippers.  The recruiting efforts made at the prior week’s Maker Faire seemed to have paid off in spades in that the average age at the pond went way down while the average IQ almost certainly went up. 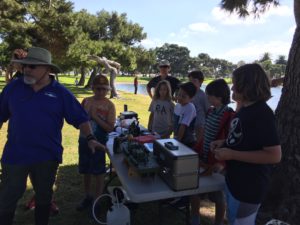 A baker’s dozen or so of enthusiastic young seamen and seawomen tried their hands on the tillers of some generously provided loaner boats to see what life was like looking out on the pond’s calming waters instead of a smart phone or computer game.  Hopefully the magic of remote control will hijack their young minds and they’ll begin to torment their parents to get them a starter boat. 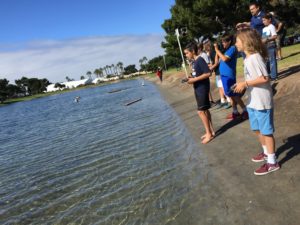 In the meantime, perhaps the club should consider making this an advertised and scheduled monthly event to try to keep the momentum going.  After all, there’s nothing to be gained by being a dying breed of old salts and surely we can scare up a few old scows and tugs for the young ones to navigate.  There is perhaps no greater joy than being able to share your skills, interests, knowledge, and afflictions (I mean hobbies) with the next generation of water sprites. 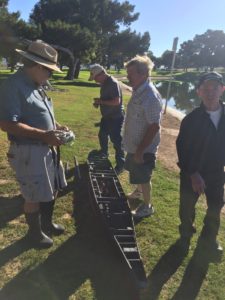 This last Saturday we were honored to be at the maiden voyage of Mr. Jack Chidgey’s 96 scale U.S.S. Missouri as it was lugged into the pond for ballasting and trial runs by Jack’s son and some hardy mates. Although the superstructure was left safely at home, the pond was graced by the distinctive lines of this fine old Iowa Class Battlewagon.

Jack – shown at the far right has been working on this kit since the 1990s and is justifiably proud of the old gal. 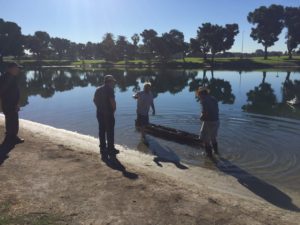 She rode well in the waves once several tons of iron was added as ballast until a slight overheating issue on the ESC forced him to go back to the hobby store.

Also on the pond for its “second maiden voyage” (we’ll give Ron the facts of life talk later) was the wonderfully fast PT Boat owned by Ron Tindall.  The boat had a bigger wake than most battleships – reinforcing the suspicion that Ron likes fast women (I mean boats). 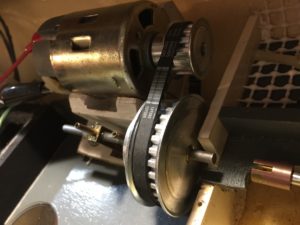 Also present (on what may be a near maiden voyage) is Mark Weber’s powerful tug Pogo (originally built by Robert Schimmel) that was recently refitted with twin belt drive motors with the help of Mark Shaw who knows a thing or two about having a belt from his days in the Navy.

Mark Shaw also stepped up to the plate to fix a couple of minor issues with the wiring of Jack’s Missouri’s motors.  Next week Mark promises to have his 1/12 scale (just kidding…1/60ish scale) U.S.S. California down at the pond for a flotation, steering, and engine test. Someone needs to bring a little bottle of champagne and we’ll need about 6 of you rusty old tars to get it from the truck to the pond. 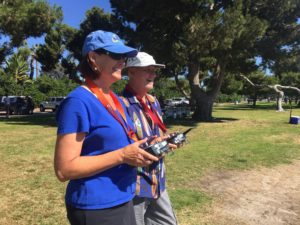 Another example of a cross-over maiden voyage is pictured here with the Gardner’s trying their hands at real (I mean powered) boats, proving that there is life before and after sail.  They seem to be enjoying the fact that you can run a powered boat directly into the wind.  We’ll have to carefully inspect their Santa Barbara next week to see if they have snuck in an auxiliary motor!

This weekend things really heated up at the pond with the appearance of an entire fleet of dreadnaughts and cruisers.  If we had had an aircraft carrier and a submarine, we could have held war games!

Also showing its fearsome visage was Dave Manley’s Yamato – which always scares the rust out of our scuppers!

And last, but not least, here’s a little humor to brighten these waterlogged pages now that you’ve suffered sufficiently.